A “Fax Machine of Things?”  Who’d believe it?

Yet it is easily within reach.  ISYN.

I wanted to add a bit more to the Ultra-Make website about this whole e-mailing to things concept which, I have to admit, fascinates the hell out of me.

In the ideal configuration,  there would be one to three online machines.

Obviously, most products would have a 3D printer aspect.  And since the present printers are in the $200 range for a basic filament-type printer, this is fairly trivial and can be widely implemented today.

However, having headed up sales and marketing in a number of tech companies over the past 2/3rd’s of a century, I am somewhat cautioned that consumers can be dumb.

How dumb?  Oh, like didn’t plug the unit into the wall and still can’t figure out why it didn’t work.  Or, on radio equipment, not plugging in an antenna…then arguing the point.

As a result, what’s really needed is something that would be trivial for an ideal partner (Amazon, or Google)  is a device which fits in-between Amazon (for example) and your existing 3D printer.

Let’s see why we need such a machine-interface, shall we?

Simply put, right now humans are in the loop.  It’s a windy, twisted place, too.  Let’s see what functions they provide: 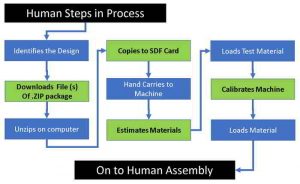 Here’s (in a nutshell) why the world isn’t quite there, yet.  The role of humans is still quite high in the design/build process using these nifty new machines.

The point today is that we can “take the people out” and “dumb-down” the process which will free up human time so that “expert sites” become less necessary.

In other words, just as aviation moved along a progression from Wilbur and Orville in the bike shop to Alaska Airlines doing near-zdero visibility landing at Dutch Harbor, Alaska in the worst conditions imaginable, consider there may be the odd Alaska pilot who’s never welded up (or forged) parts for a bicycle!~

We see the potential in Ultra-Make for a much faster than 118-year ramp-up time.

Here’s an initial short “punch list” of what the computer (this new-fangled fax-of-thing box) does: 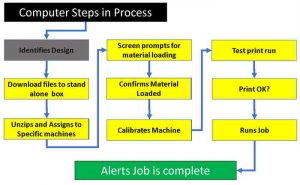 When you’ve been around computers and databases for several decades, this kind of thing becomes obvious.

Simply put, the reason 3D/CNC is not widespread (yet) is become no one has put the marketing and software integration obstacles on the table and suggested a codable track to a finished product.

In order to take humans “out of the loop” however, there are a number of obstacles to consider.

Not the least of which is which big retailer (like an Amazon) is going to have the vision?

Amazon is THE natural because they have already build the “buy-software delivery model” in their Kindle product.

Now, imagine something the size of the Kindle Fire 8 as your platform.

You’d have a choice or either a specific machine-connect cable, OR a series of wireless adapter devices that would auto-assign DCHP addresses to accessible machines on your home network (workgroup)..

There would be an additional build file” associated with  the email delivered .STL and G-code files (and in addition to the Maker’s .PDF instructions).

That would be a materials estimate.  .

Knowing this kind of baseline printing information will let the home user of this “Fax Machine for Things” how much filament to expect to use.

Or, to expect the first machine alert received to say “Filament Out, Please reload, then press [A] to continue…

One More Product in Passing

Here’s a great little product idea – for when you have a job in your print cue and you don’t want to be bothered with a machine reload half-way through a job.

Make a small hand-held “filament welder” which would produce a nice join of two pieces of filament.

That way, when you get down on one roll of filament a ways, you could load in your scraps and use ’em all up.

There’s no free lunch, however.  Since the join will have to pass through your extruder, you’ll need to ensure that the joins don’t exceed the standard 1.75 mm thickness used in most small 3D machines.

Not an issue on  resin printers, where you can keep loading up resin and maybe gin-up an additional holding pot for more resin.

Short report  but an intriguing idea.  I’ll let you know if anyone (besides me) gets excited about it.  There’s a lot of nuances to it.

Write when you get rich..

Job to Big to Print?

Need a Circuit Board Etched for a Build?